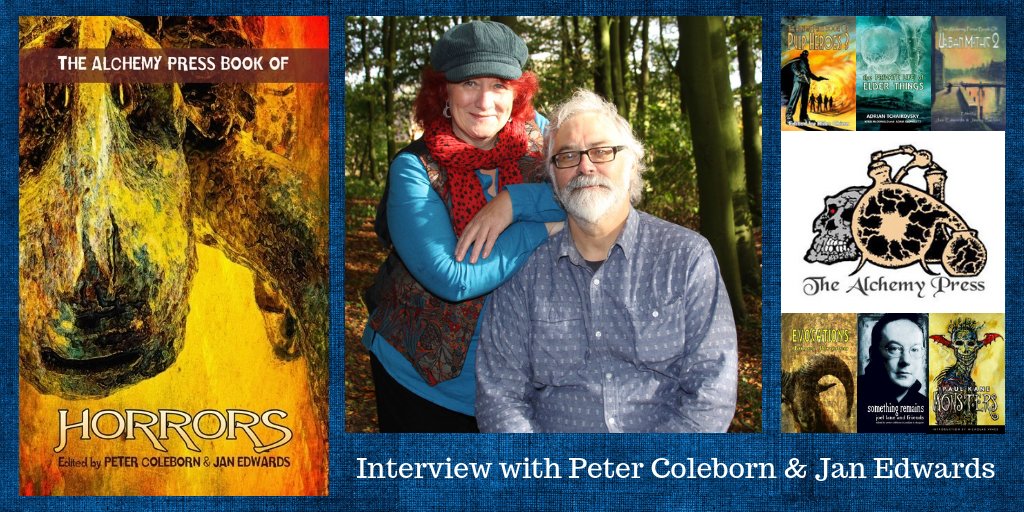 Editors of The Alchemy Press Book of Horrors, Peter Coleborn and Jan Edwards, have been interviewed by Jenny Barber:

Besides the very general theme ‘horror’ the book has no theme. I feel that stories in themed anthologies, especially tightly themed ones, can become too similar. I enjoy variety. I enjoy coming across something unexpected. In this I mirror the views expressed by Mark Morris, editor of the wonderful New Fears series.

I use the word ‘horror’ as a wide catch-all net. What you will find between the covers is 25 well-written yarns that will hopefully chill you, or at the least make you go: wow, I didn’t expect that. Weird stories. Creature features. There are stories that may have been at home in The Pan Book of Horror Stories, perhaps in New Terrors (edited by Ramsey Campbell), or in one of Stephen Jones & David Sutton’s anthologies. Other anthologies are available.

The latest two Alchemy Press Books Of are now available from Amazon and other online stores.

An alien visitor arrives on Earth to solve our problems – whether we want it or not. The world’s greatest superhero is lost, and only his deadliest enemy can save him. Why did the best cop in the city end his days as a forgotten drunk? And once, in fin-de-siècleParis, there were three very different girls who grew up to be three very different women with three things in common: they were brilliant, they were beautiful, and they worked for Erik of the Paris Opéra. Twelve stories of supermen, cops, Mysterymen, samurai and private eyes from the likes of Kim Newman, Rod Rees, Tony Richards and more … thrilling tales of pure Pulp Adventure.